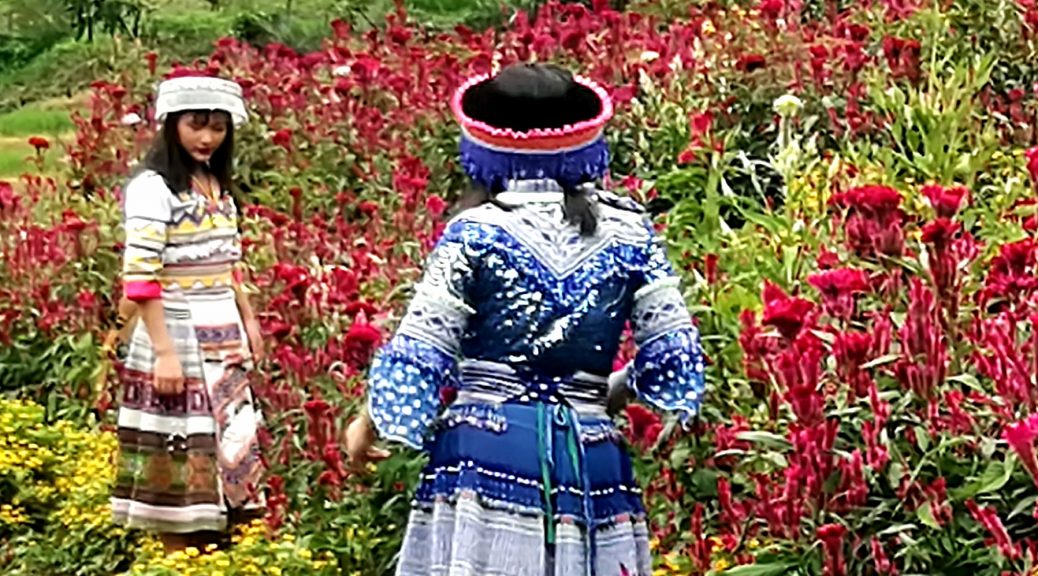 Mud mud mud gloop gloop gloop. Between Ha Giang and Sapa it rained quite a bit. The final climb up to Ta Van was huge and in a lot of places just hard packed gravel and mud. Tough going but I make it in the end. 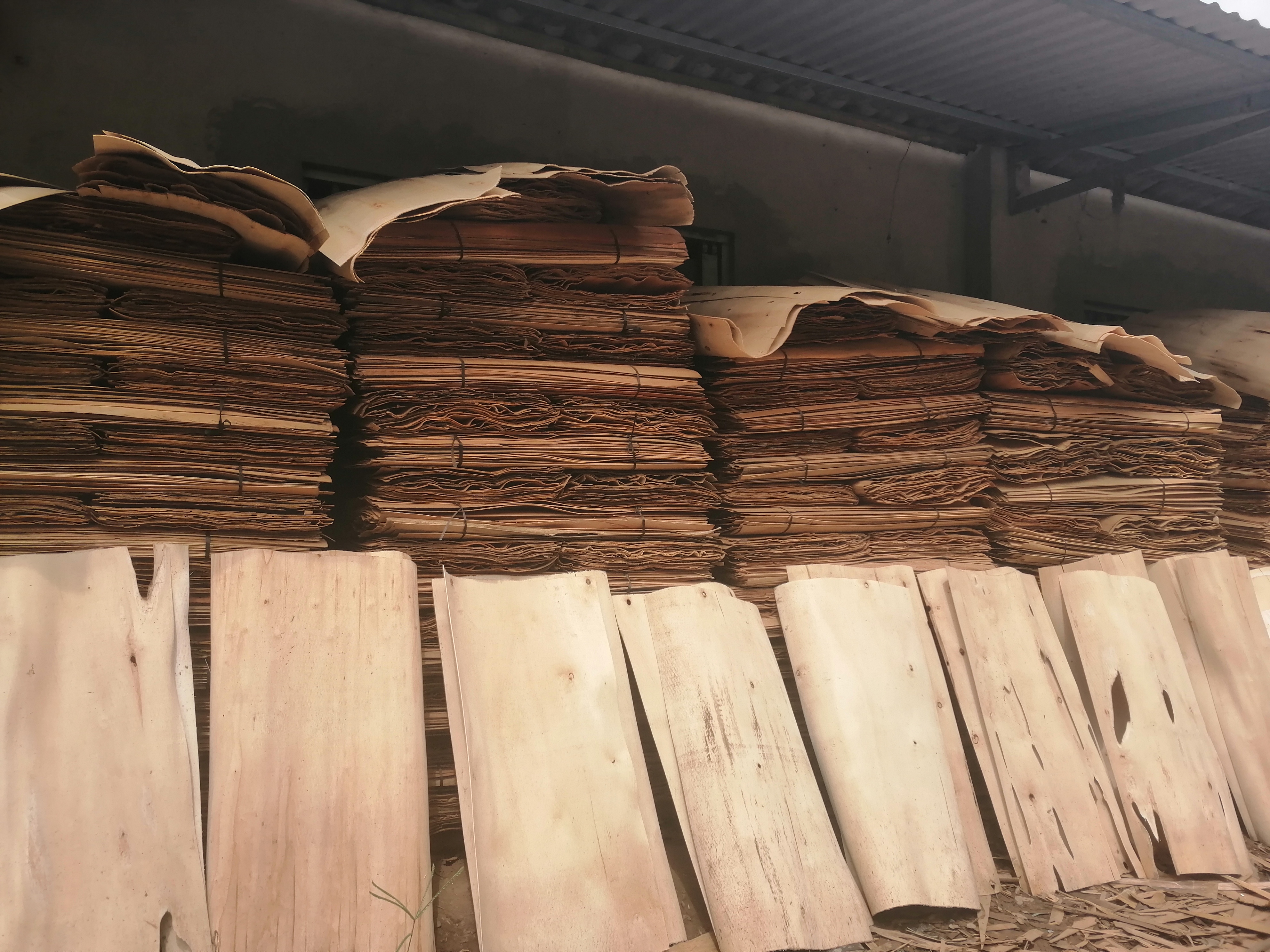 Time for a couple of days off which I spend walking up the hills through paddy fields and waterfalls then on the second day up along the river that flows down the valley.  Sapa is famous for its rice terraces and they are in full green splendour at this time of year. I’m also fortunate that the weather stays amenable. 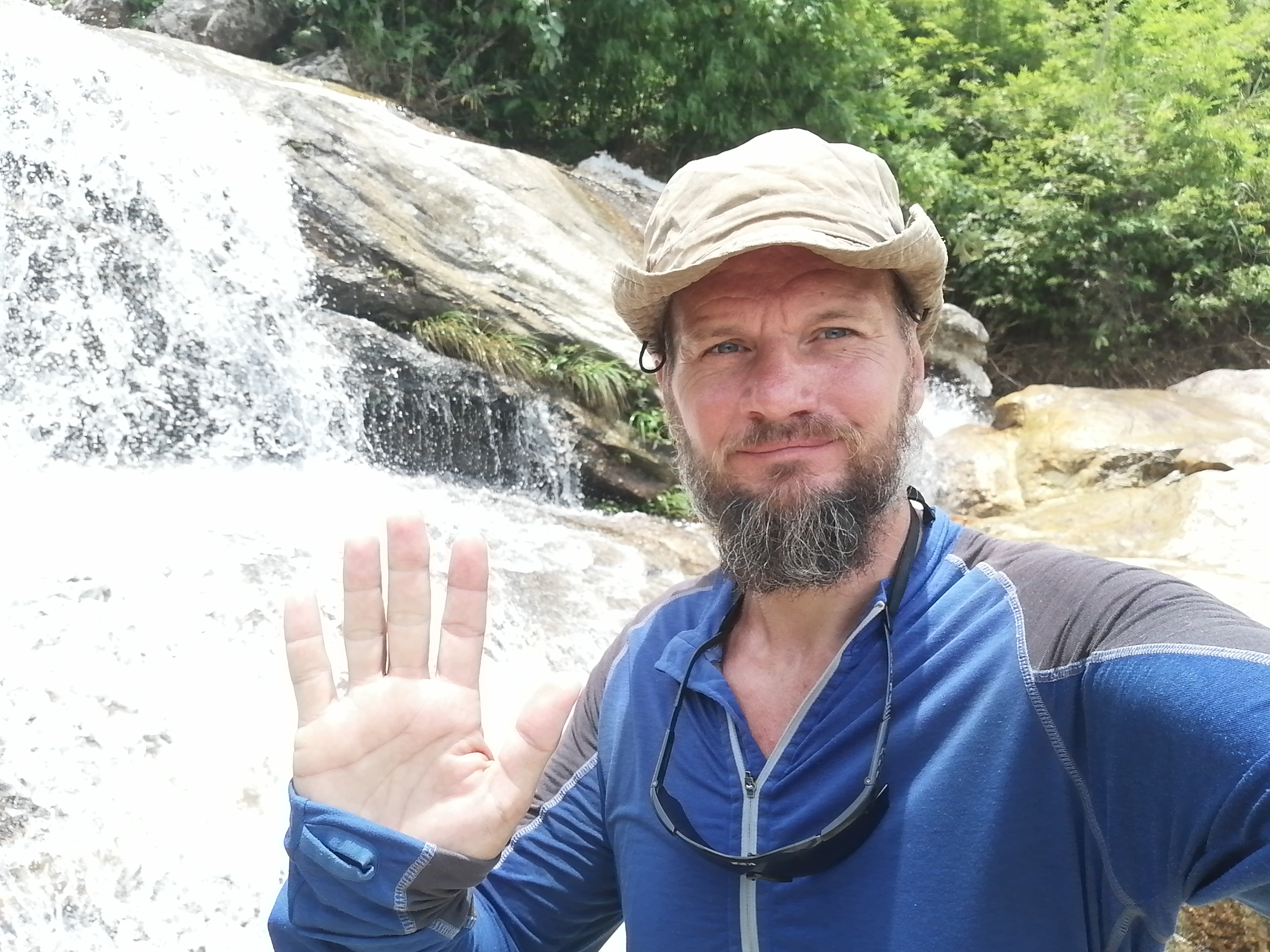 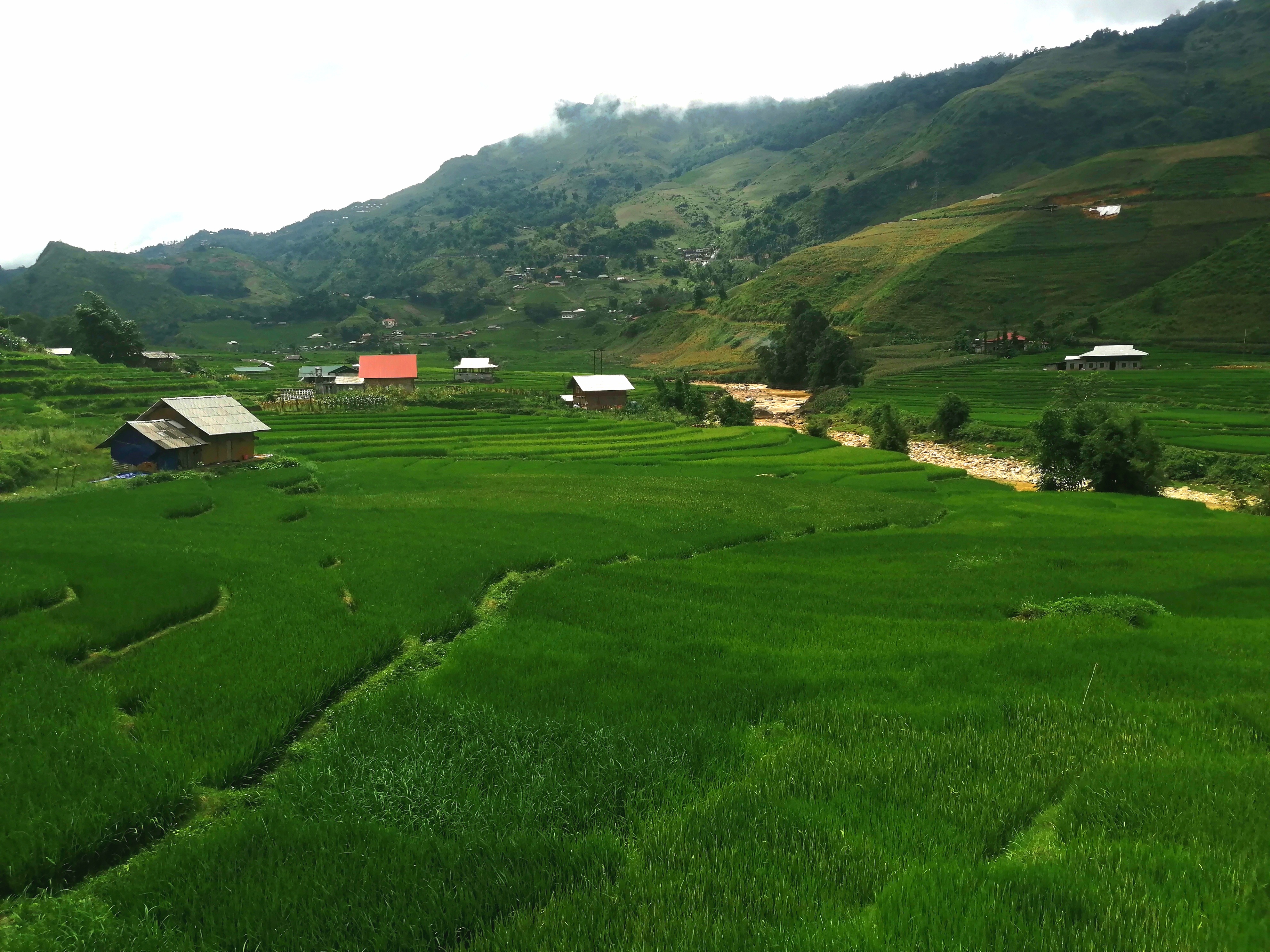 Up up up. Today I head up to Sapa at the head of the valley. Its only 10 short kilometers, but its uphill every step of the way. The road surface is in a terrible condition and there’s tons of road works but not a lot of progress me thinks.

I’m hoping whilst I’m here in Sapa to climb Mt Fansipan, the highest peak in Indo China. Just need the weather to stay fine as visibility is very hit and miss up on the peaks.

Whilst waiting for a weather spot I do visit Cat Cat cultural village which was formed in the 19th century by the gathering of families belonging to ethnic groups living in the mountainous areas of northern Vietnam, especially the Black H’Mong .They lived next to each other along the mountain side and cultivated the land surrounding their home. Rice and corn were grown in terraced fields, while traditional handicrafts such as twisting flax and weaving fabric have been well-kept. There’s now a touristy mock up of some of the villagers house and waterwheel. Tools from the era are on display and to cap it all there’s a stunning set of waterfalls and bridges. 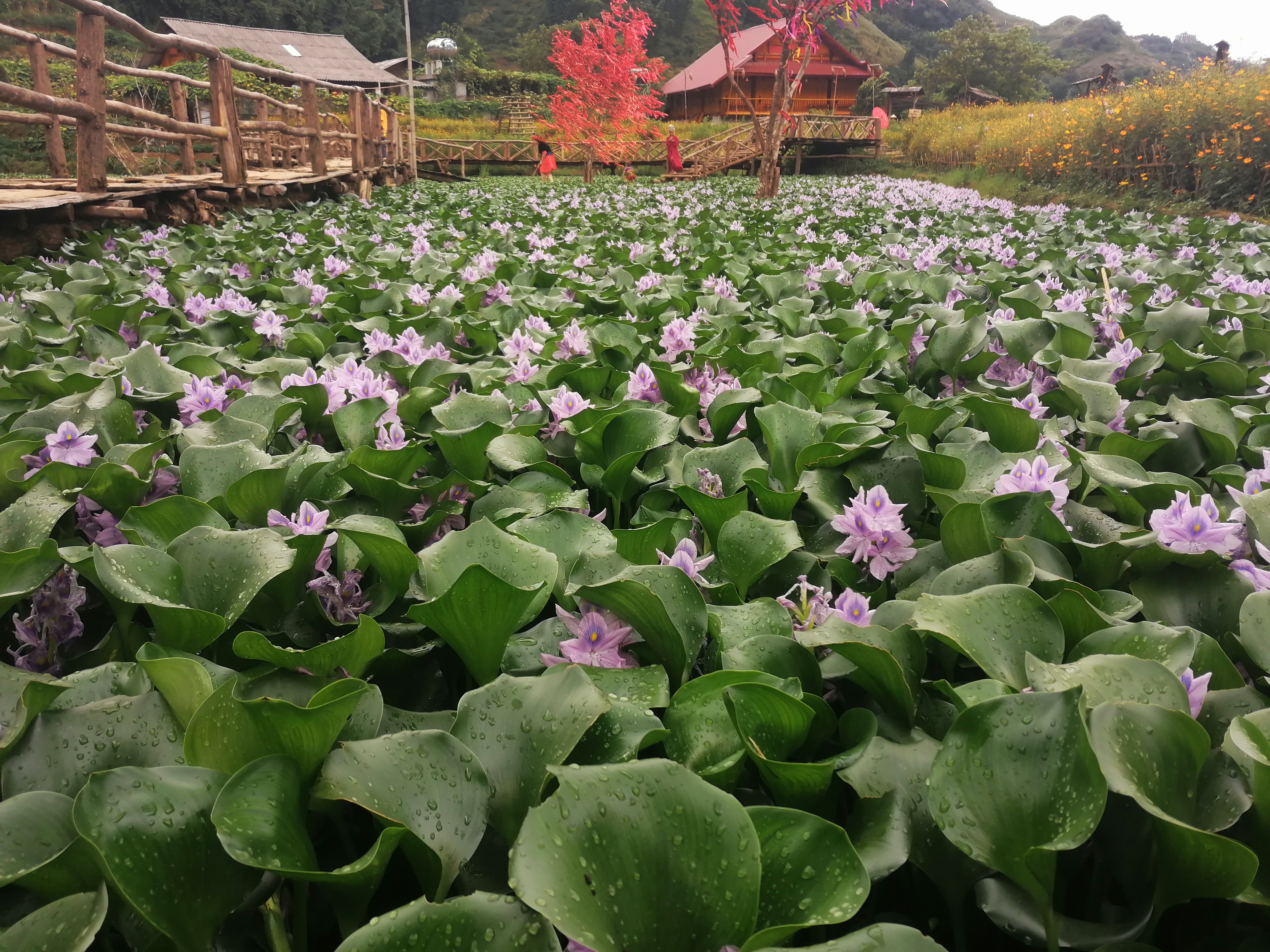 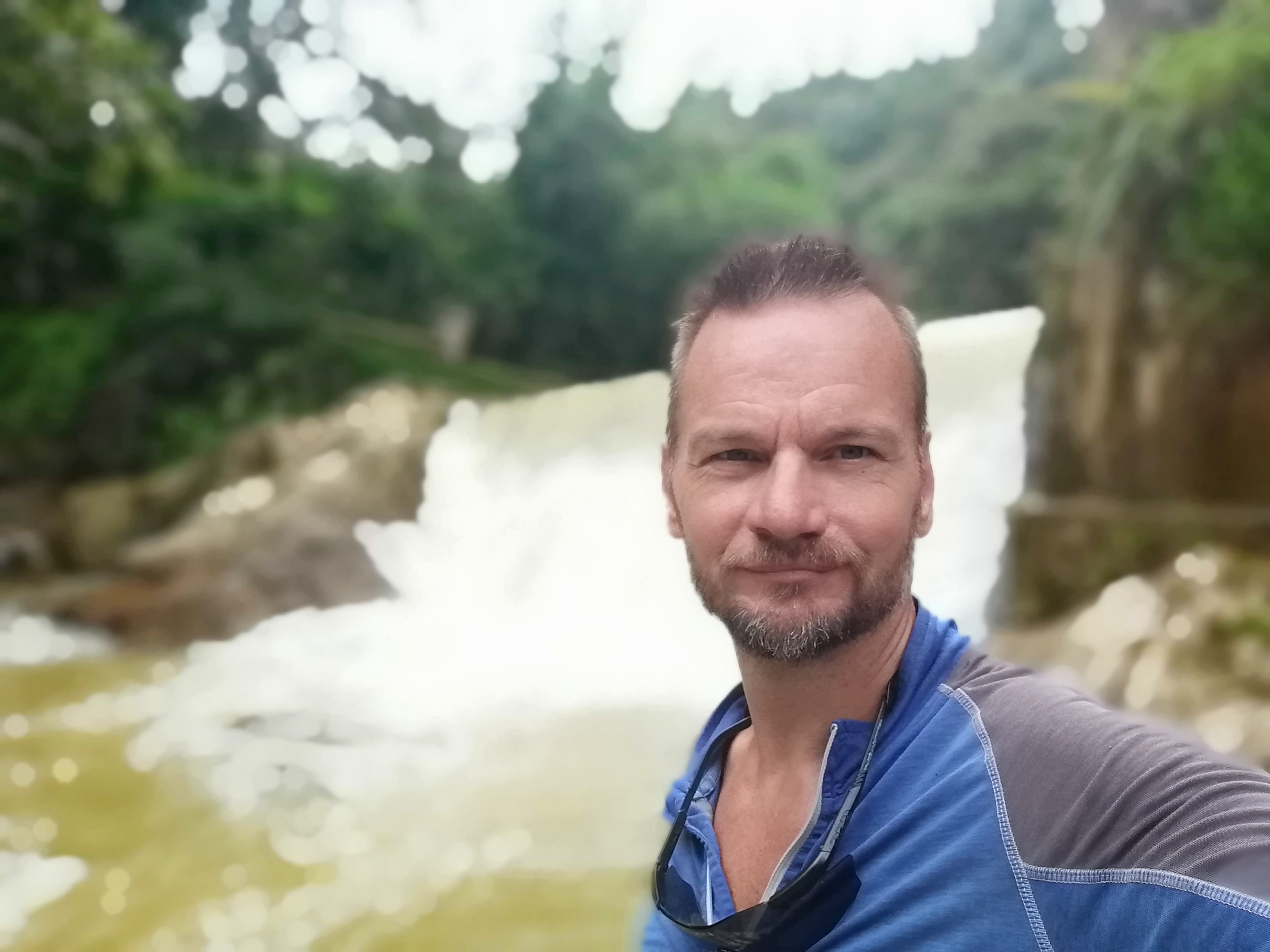 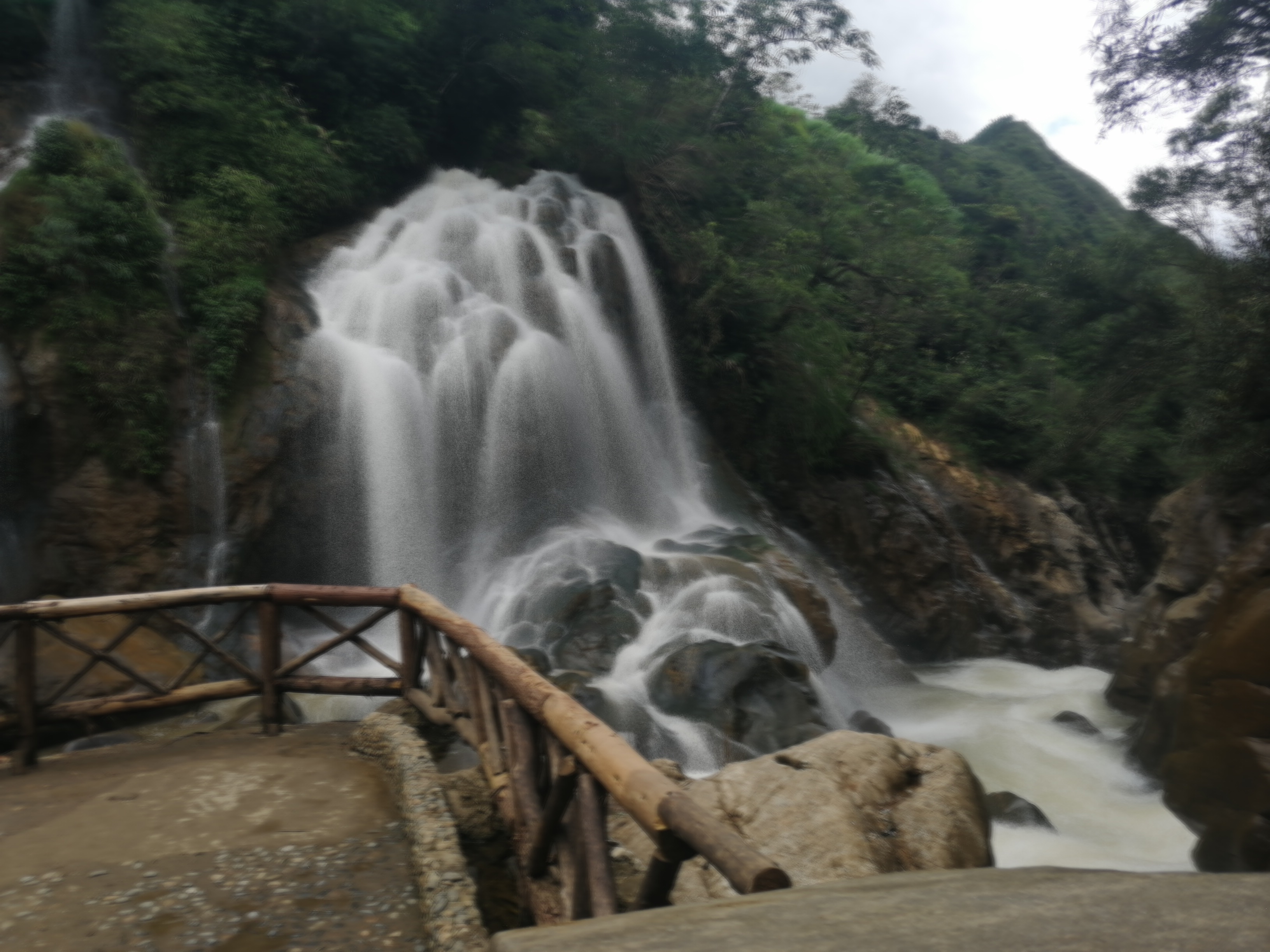 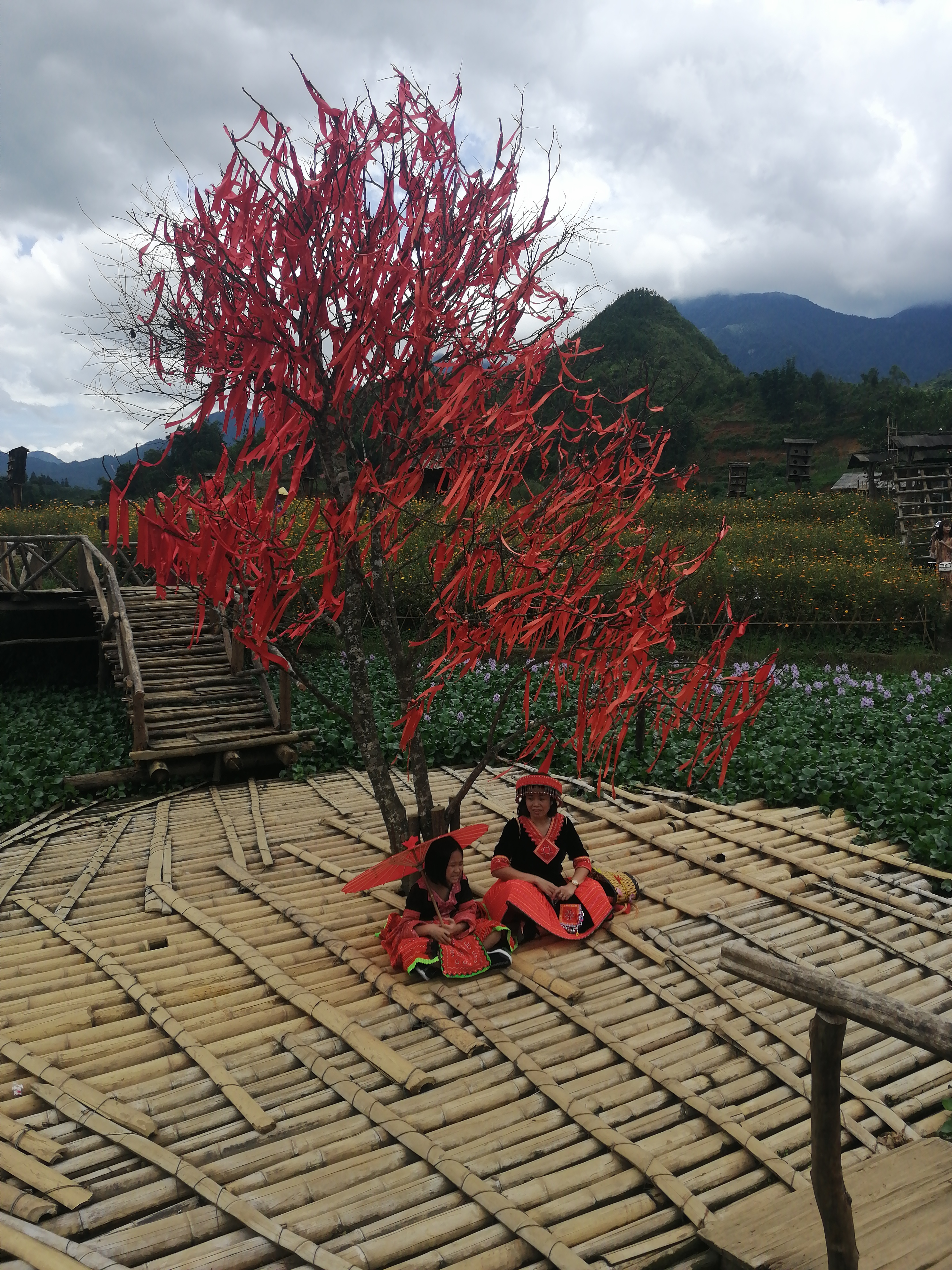 Finally I decide that Fansipan is a no no . Everyday the peak is covered in clag. Time for a quick visit to Hanoi, see Nick and Ha again and also apply for my 2 month Thai visa. I can get 30 days free, but it’s not long enough and at $40 it’s cheaper to get it here rather than paying $60 to extend in country. I drop off the application and money one morning then pick it up the next afternoon, all very smooth.

It’s great catching up with Njck and Ha again, and as an added bonus I’m invited along to an extended family celebration. One of Ha’s nieces has just graduated from law school. After a superb meal of ribs, sausages and salads we end up back at Ha’s sisters house for karaoke and whiskey, neither of which I do well at but give it a good go!! 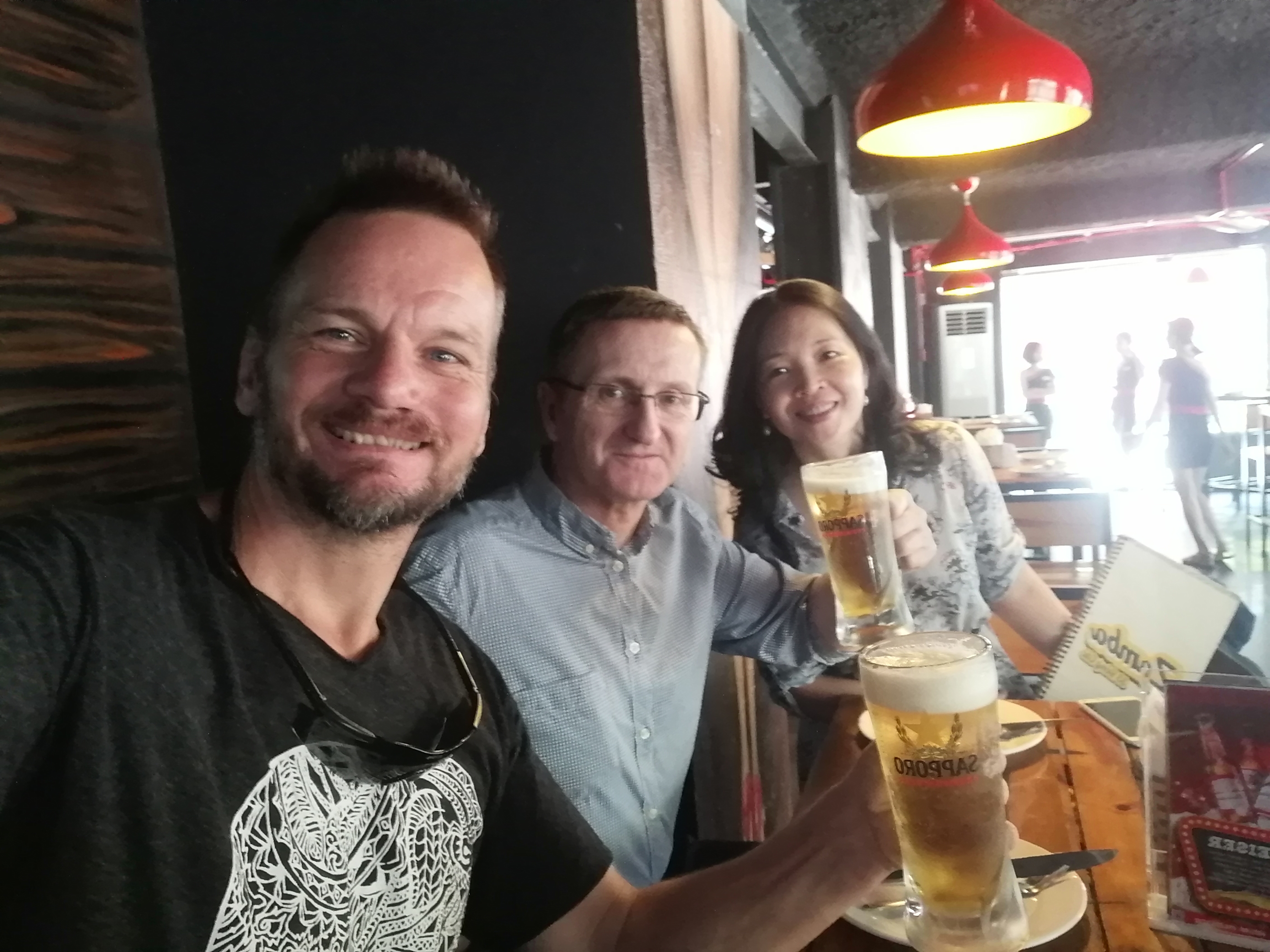 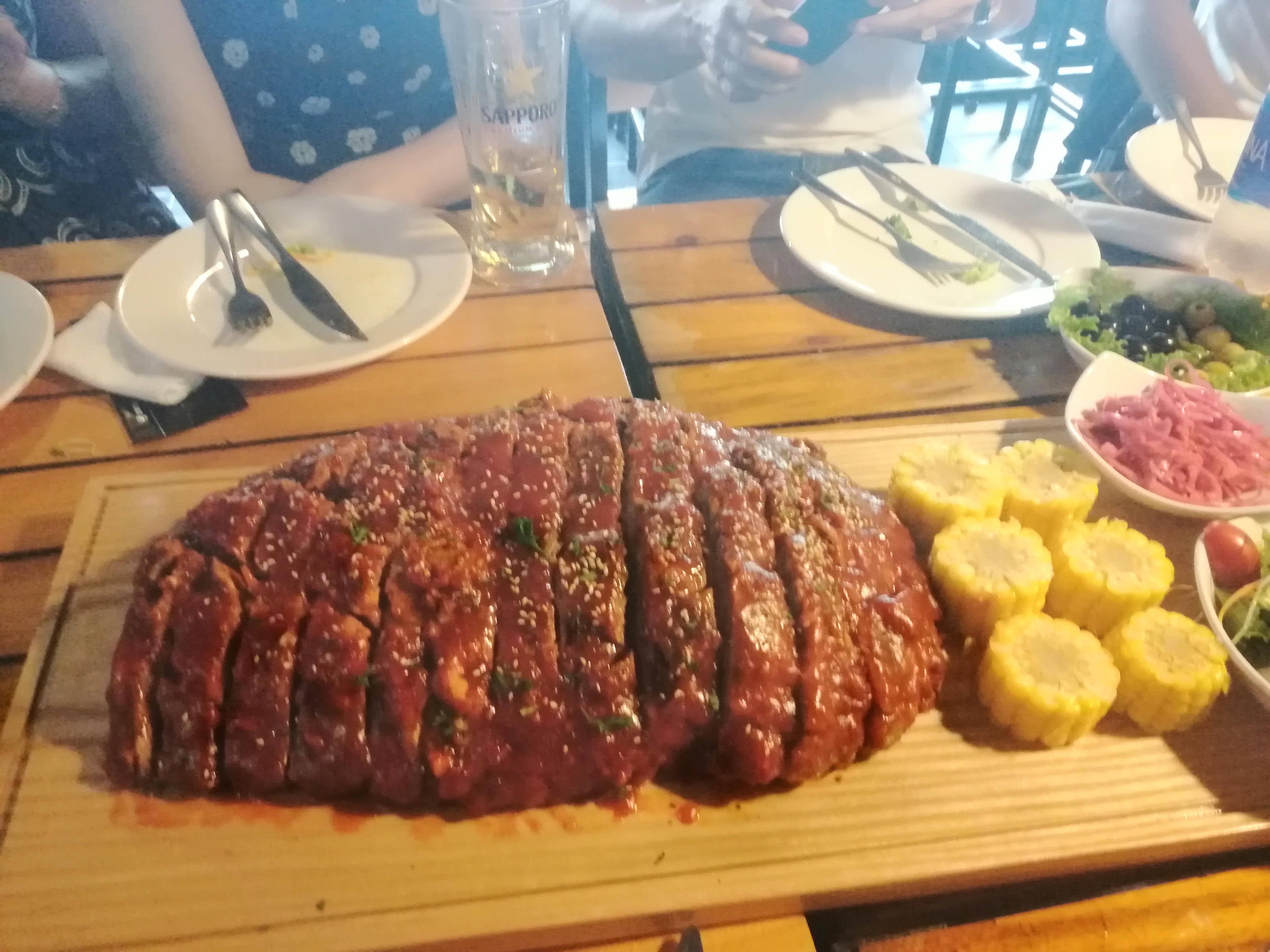 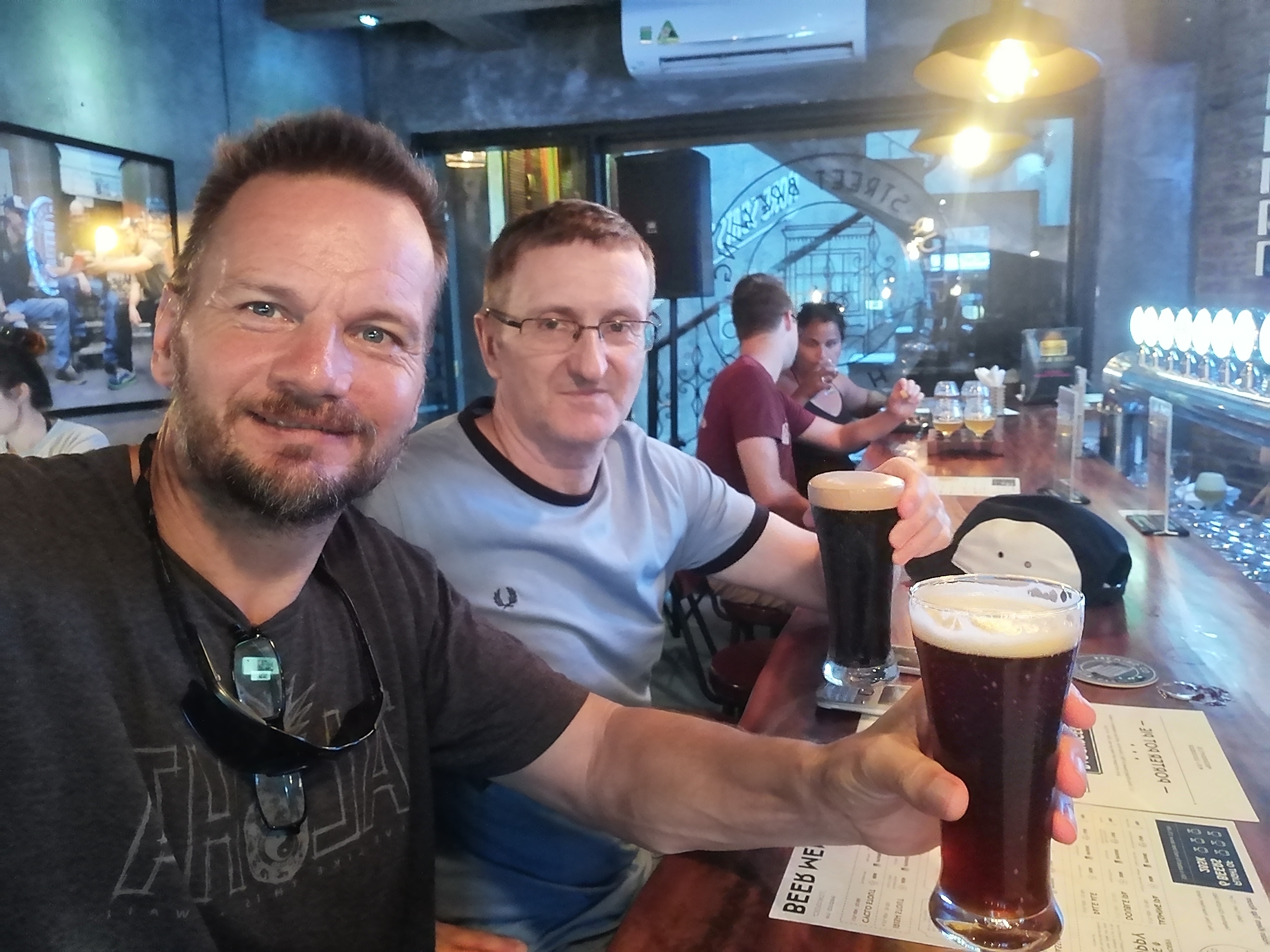 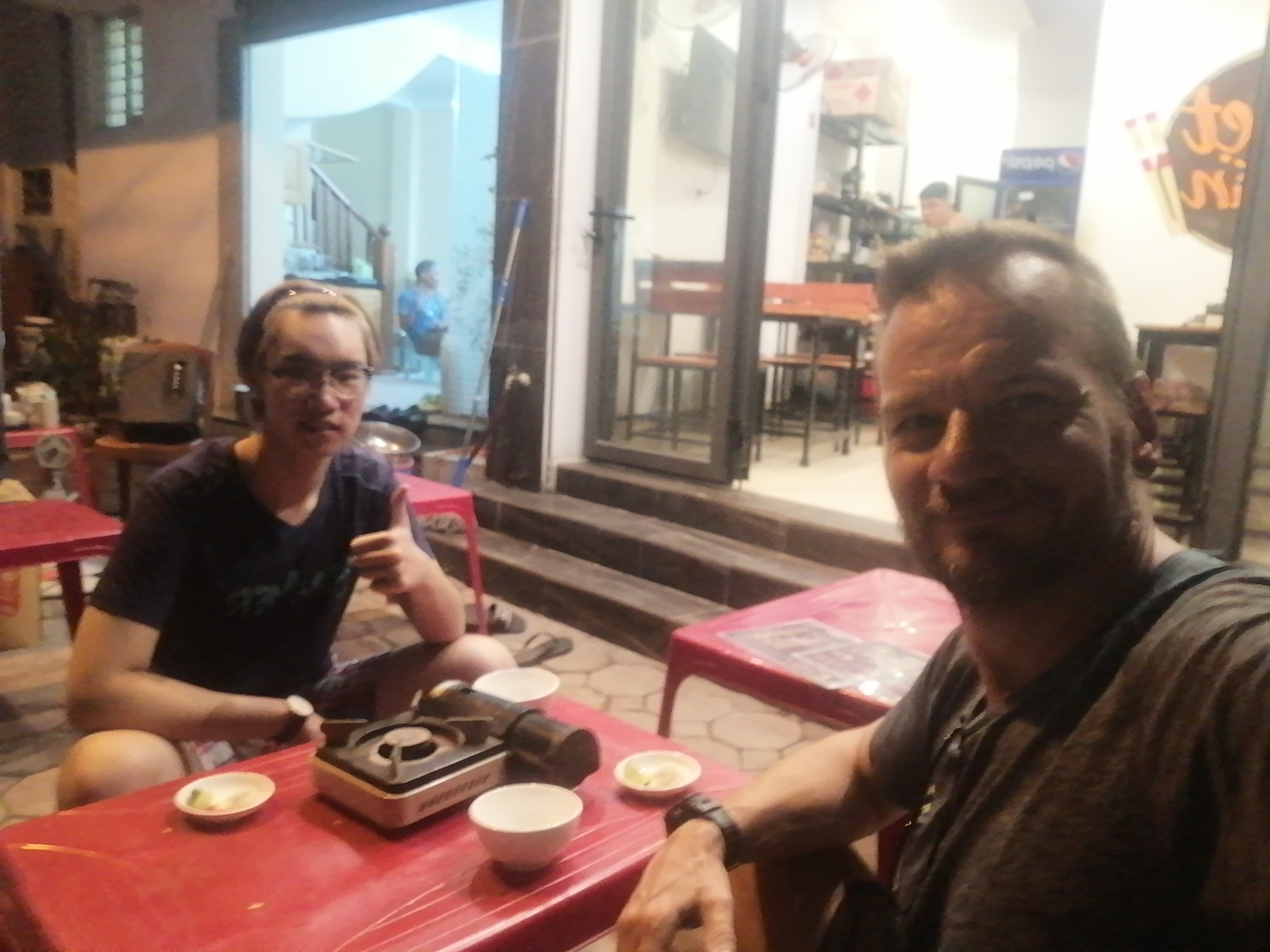 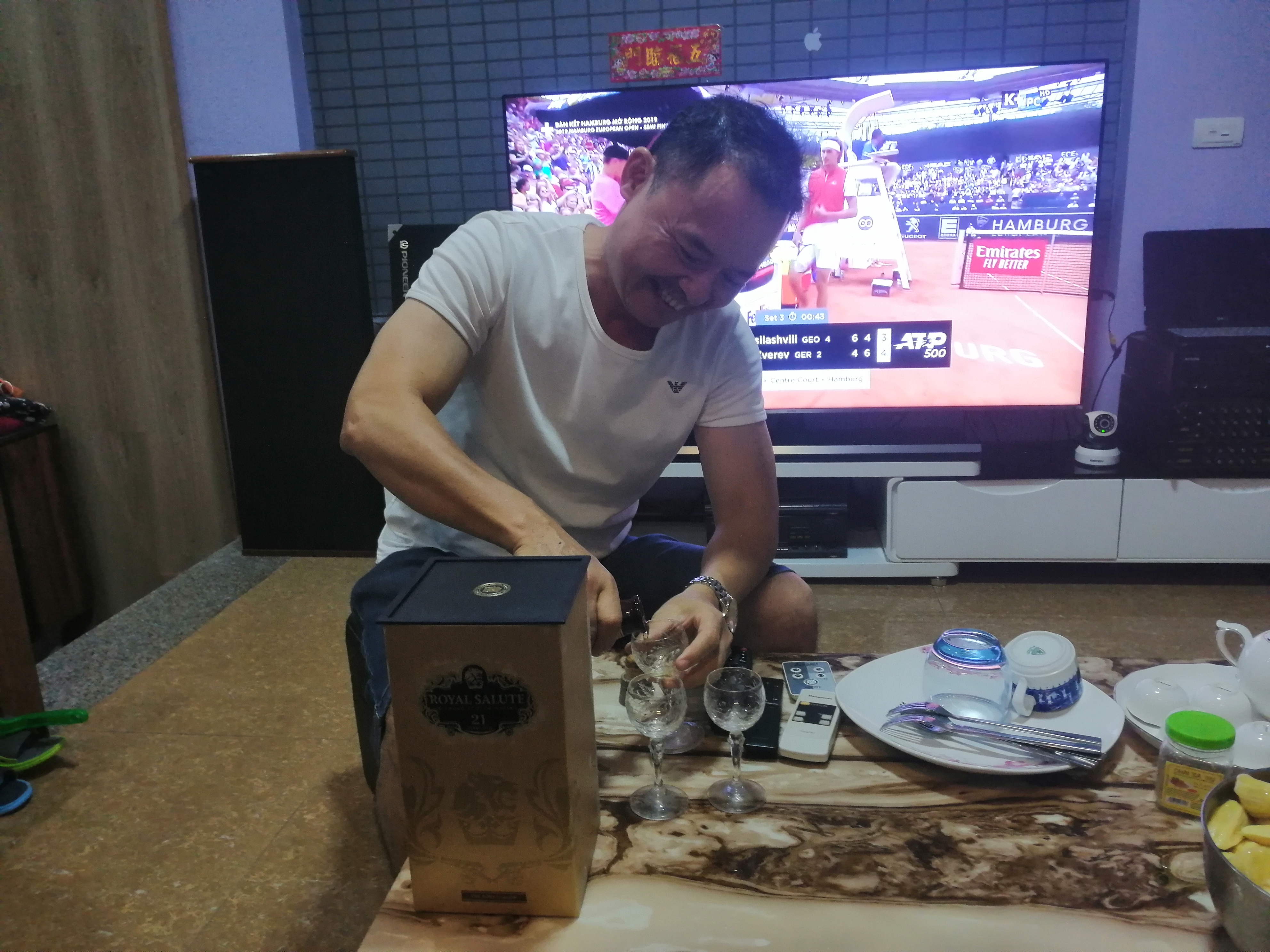 I head back up to Sapa, and the weather hasn’t changed. It’s pouring with rain now. Oh well I’ll have to save Fansipan for another day and maybe Nick and Ha will join me!

It’s time to get back on the trike again and head to Dien Bien Phu and then Laos. It’s been 2 weeks lazing about, how time flies. The route to the border should take about 5 days. To start with a bang there are two huge climbs today (with corresponding downs!) and finally the sun came out to play with a vengeance. But again Vietnam showed me its kindness. In one village a woman flagged me down and gave me two bottles of chilled water. Then later as I was resting on a hill a young chap came by on a motorbike and gave me 2 bottles of ice cold lemon tea then shot off. Wow. To cap it all of another man flagged me down around lunchtime and invited me to his home for lunch. Thai Le and his mother sat with me and I had some delicious food to fill my belly. Thai Le dreams of travelling but economic factors will probably mean he never gets the chance. I wish him all the best. 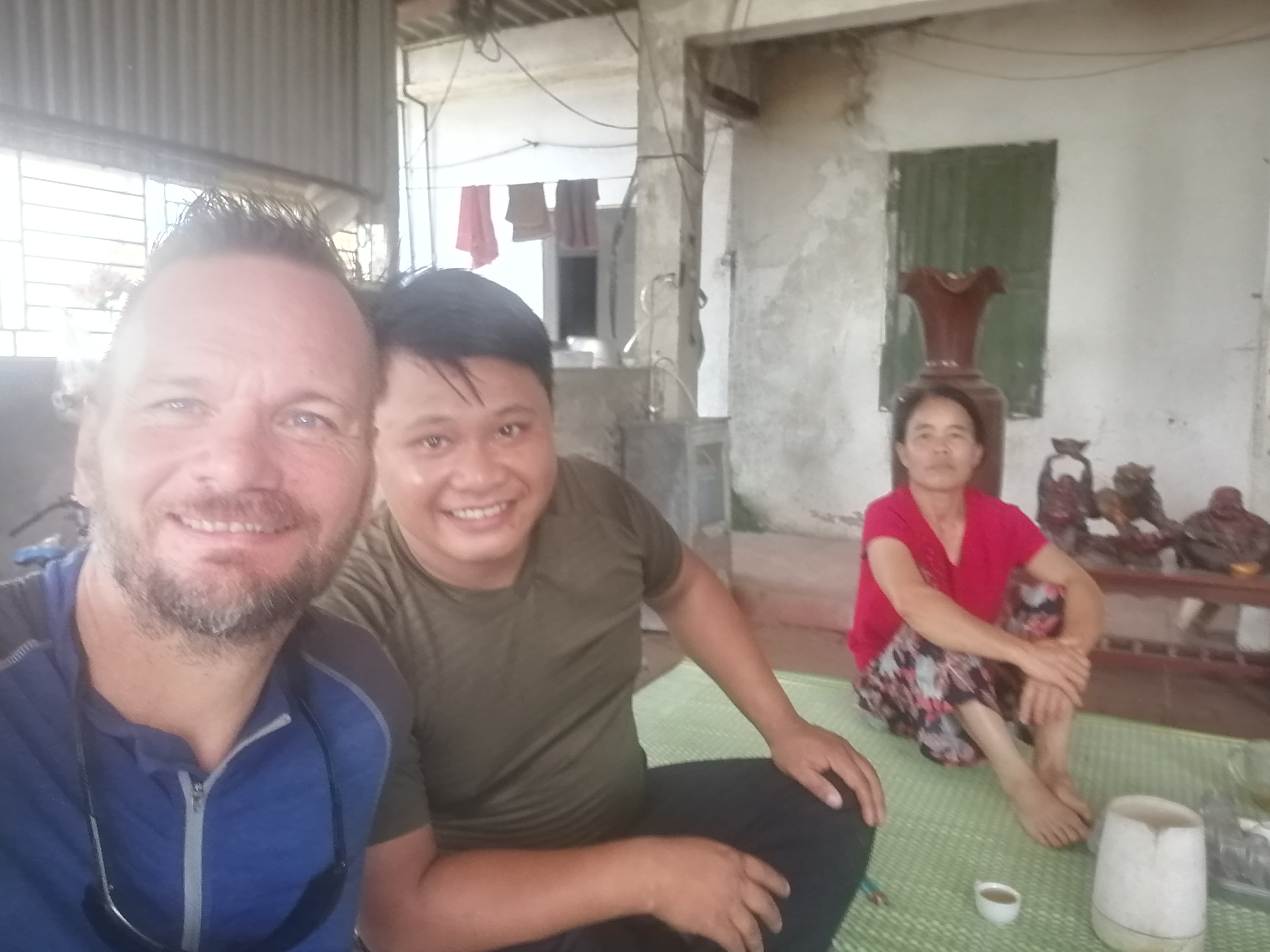 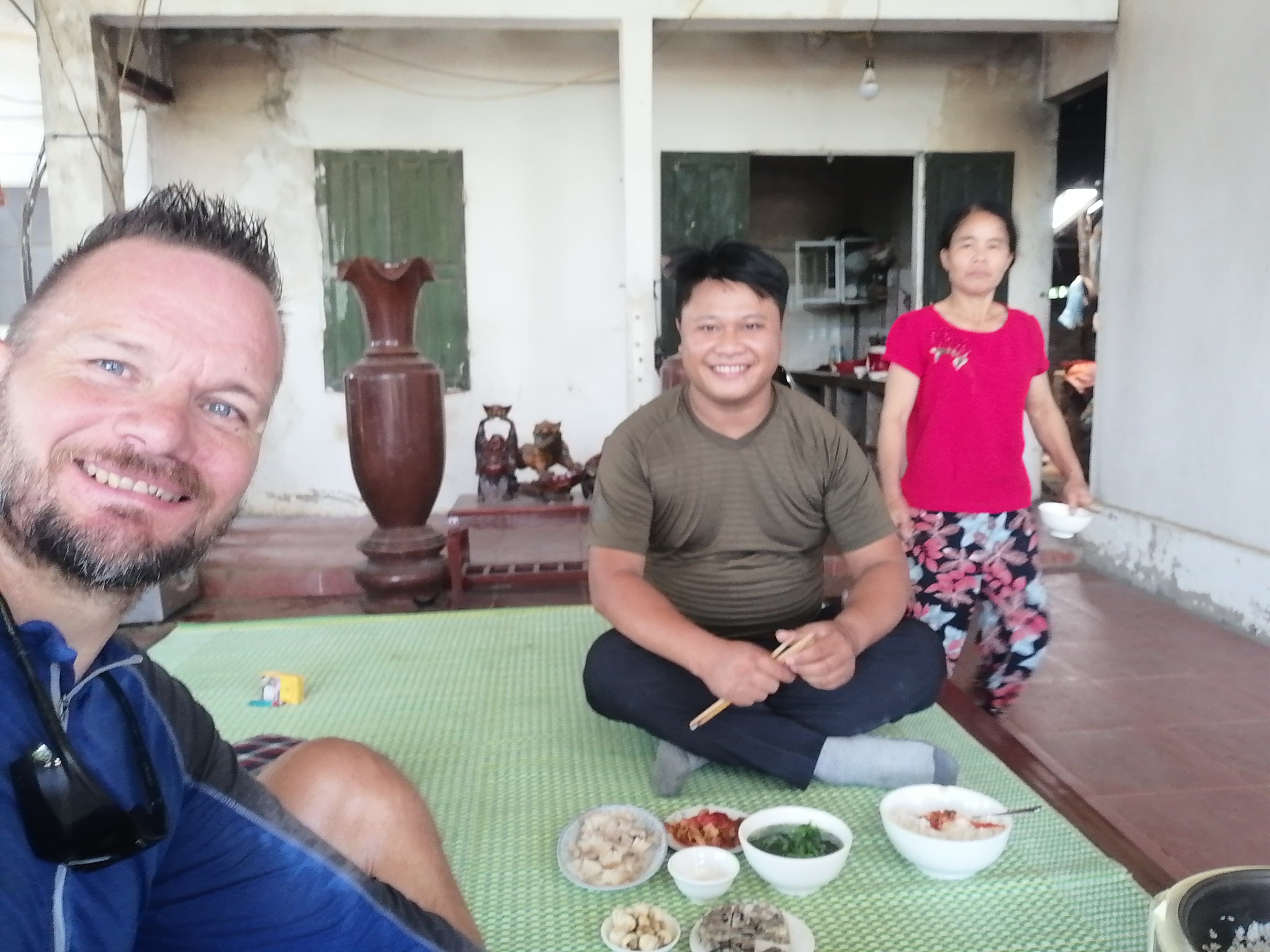 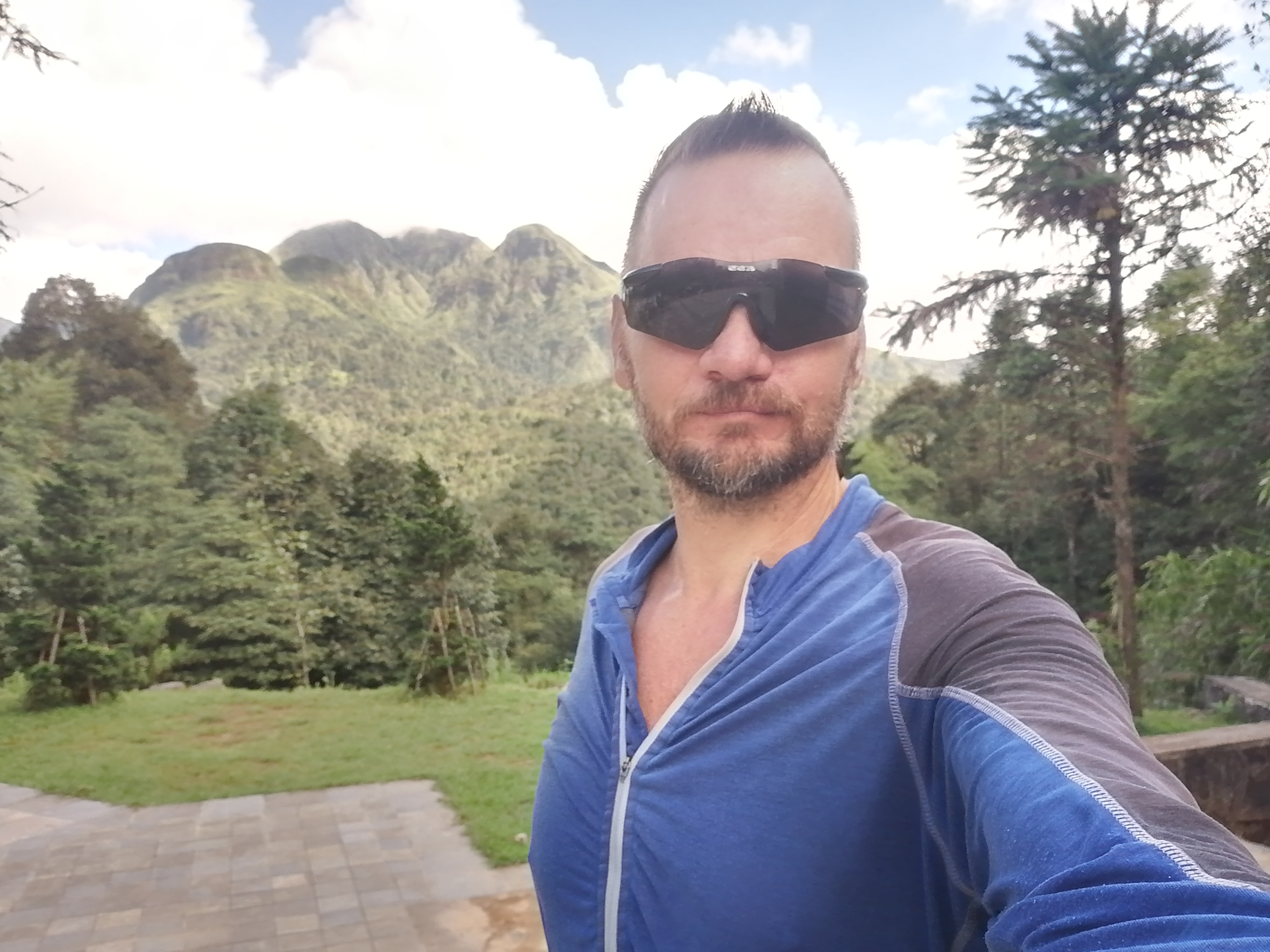 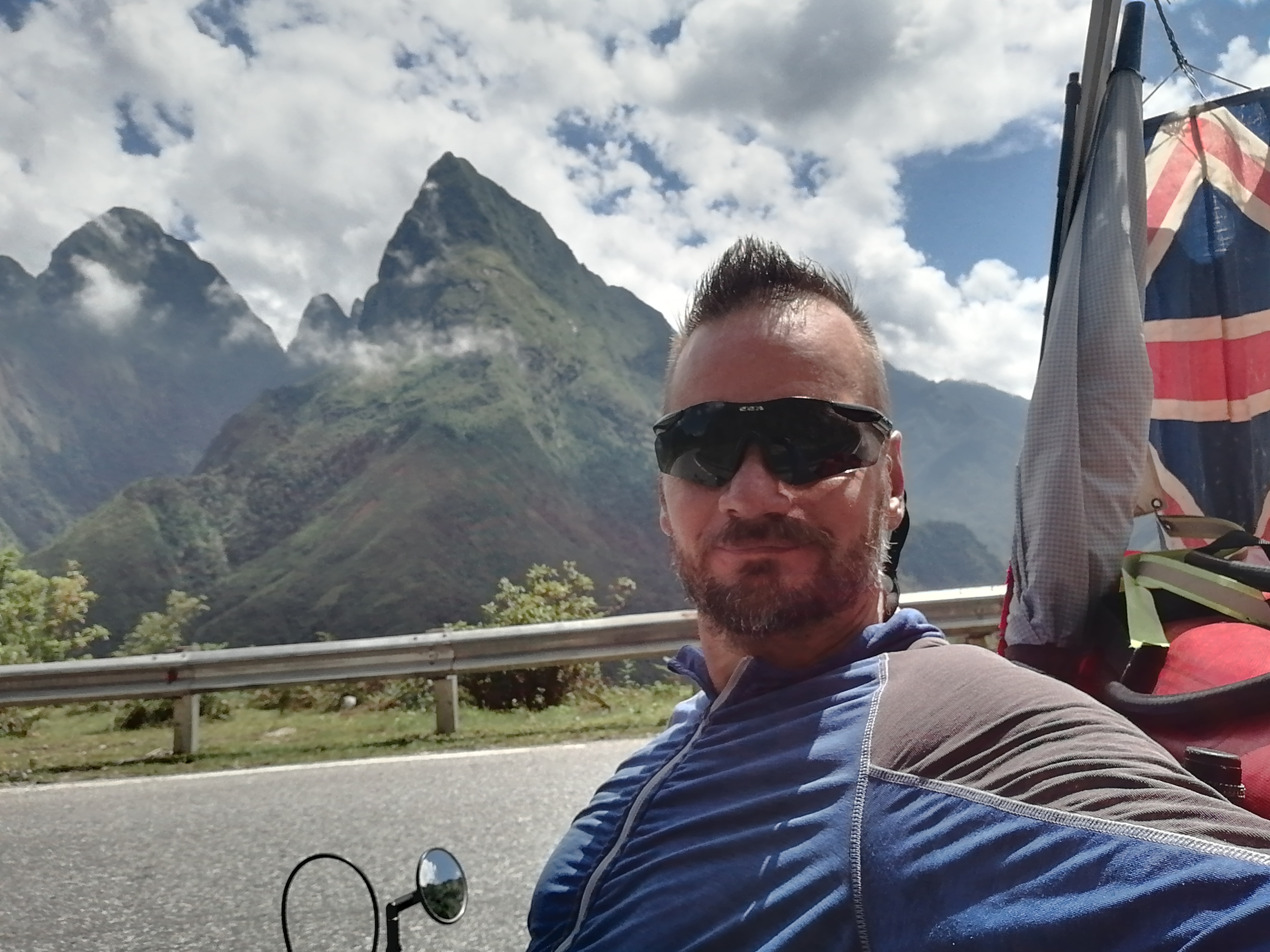 Options today were 46km, 82km or 102km. After an initial grueling climb I dropped down to a river and then cycled up, down up for the next 30km. Who said rivers were flat! 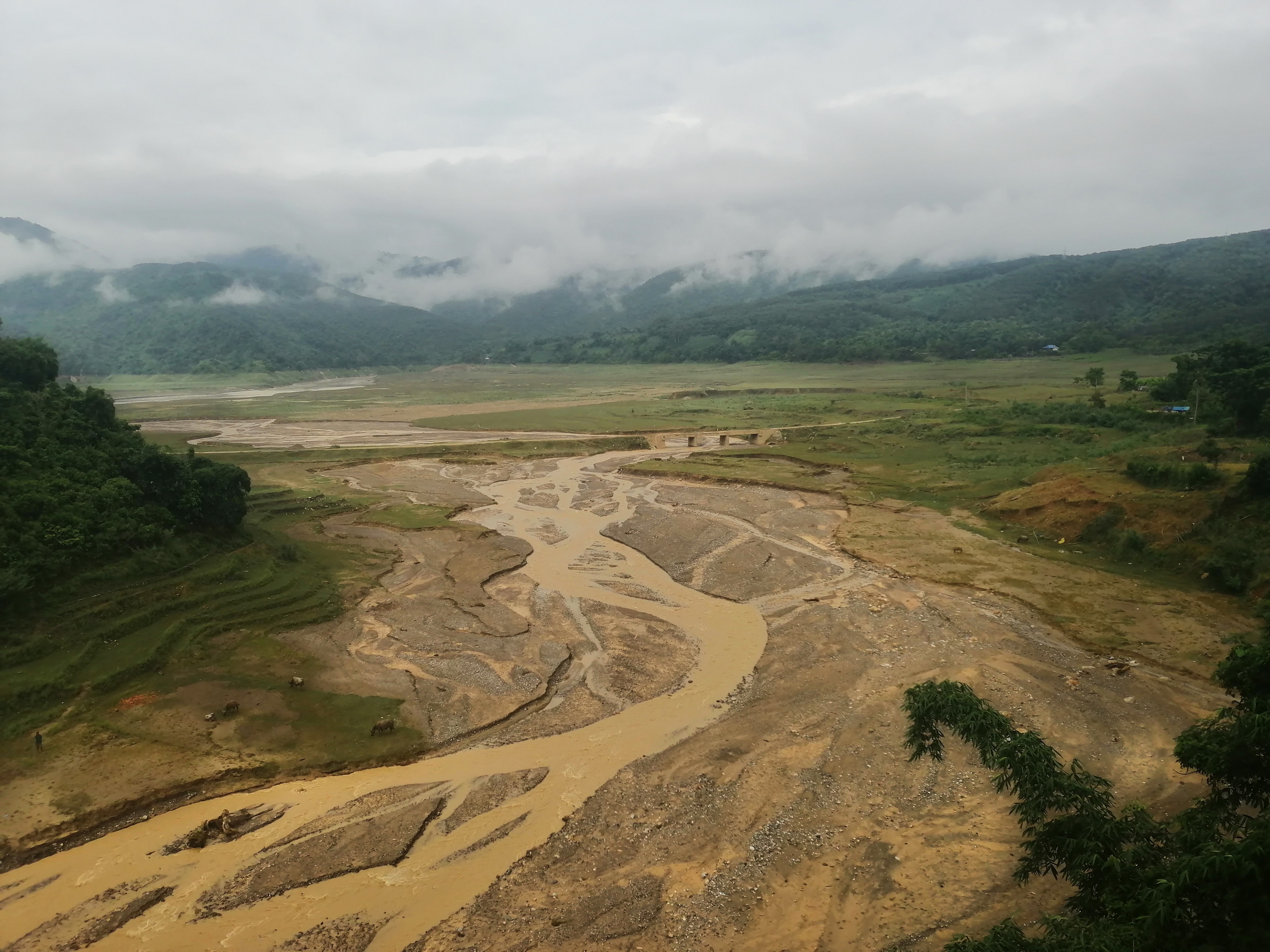 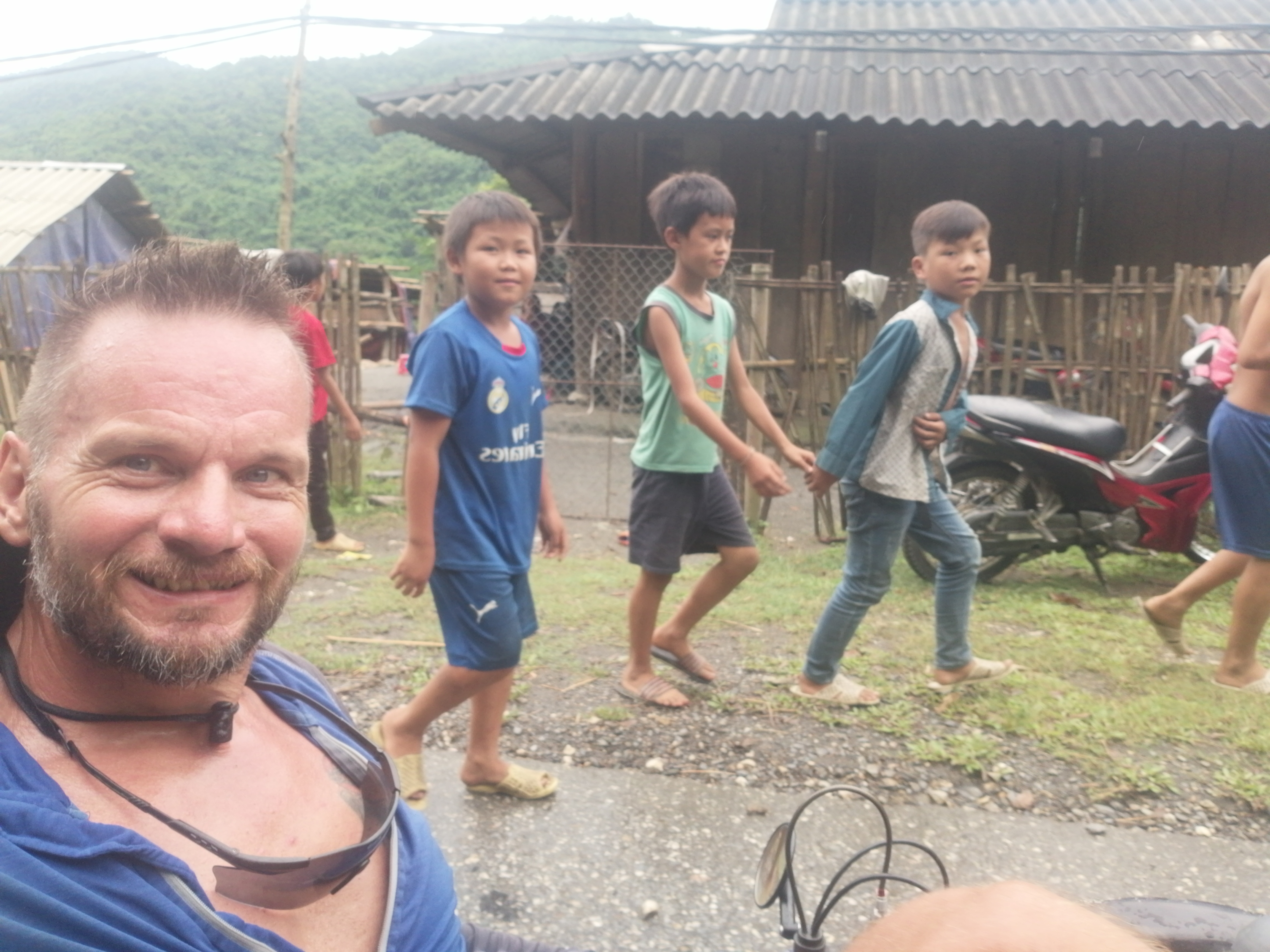 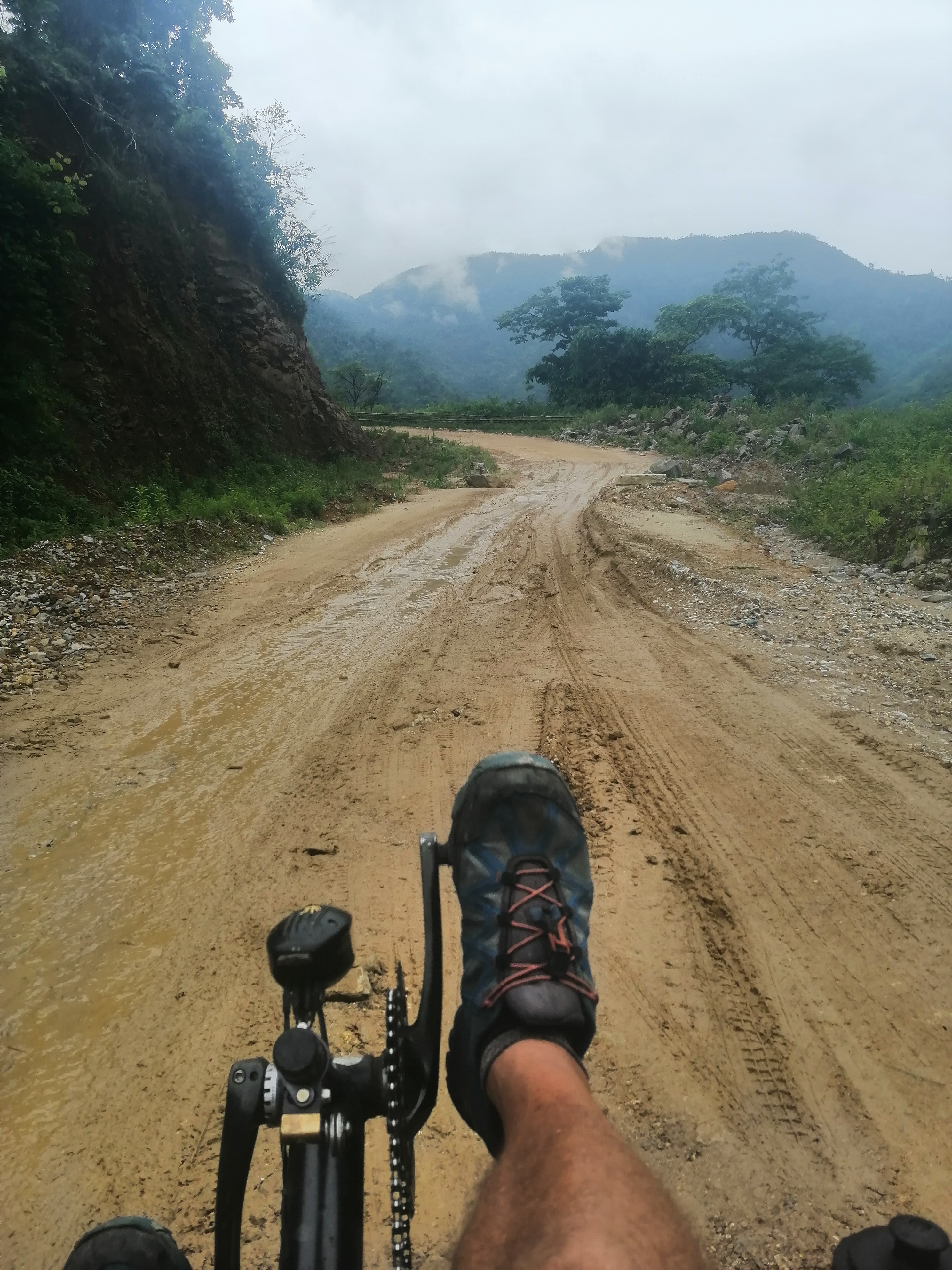 At 46km the accommodation looked a bit ramshackle and I was feeling OK so I pushed on. Oh god do I wish I’d stayed put. After yesterday my legs were already tired and with the blazing sun and hardly any shade I was suffering. Each little undulation felt like a mountain. I dipped myself in waterfalls coming off the hills in a bid to cool myself. At one point I ran out of water, had to sit under a tree for 20 mins to cool down and then push on. The road is so quiet. Hardly any traffic. After another 40 mins I come into a small village and find a shop for water and coke! I sit on a plastic stool in the darkened shack guzzling them down. Children gaze at me as if I’m an alien. I probably am, they don’t get many tourists stopping here. Another final climb and I come into another small village. There are 2 guesthouses here and although the first one is grubby, dingy and probably the worst looking guesthouse I’ve visited I decide I can’t go on any further. Oh and the mattress is solid too! But you can stick the 102km option up your derriere!

Oh god, I really thought I was not going to make it today. 8 and a half hours on the road. 7 hours 10 mins cycling, the last 19 km hill was a killer and took me 4 hours to climb. Think I need a rest day when I arrive in Bien Dien Phu tomorrow. Oh and to cap it all I couldn’t even enjoy the downhill as the heavens opened!! 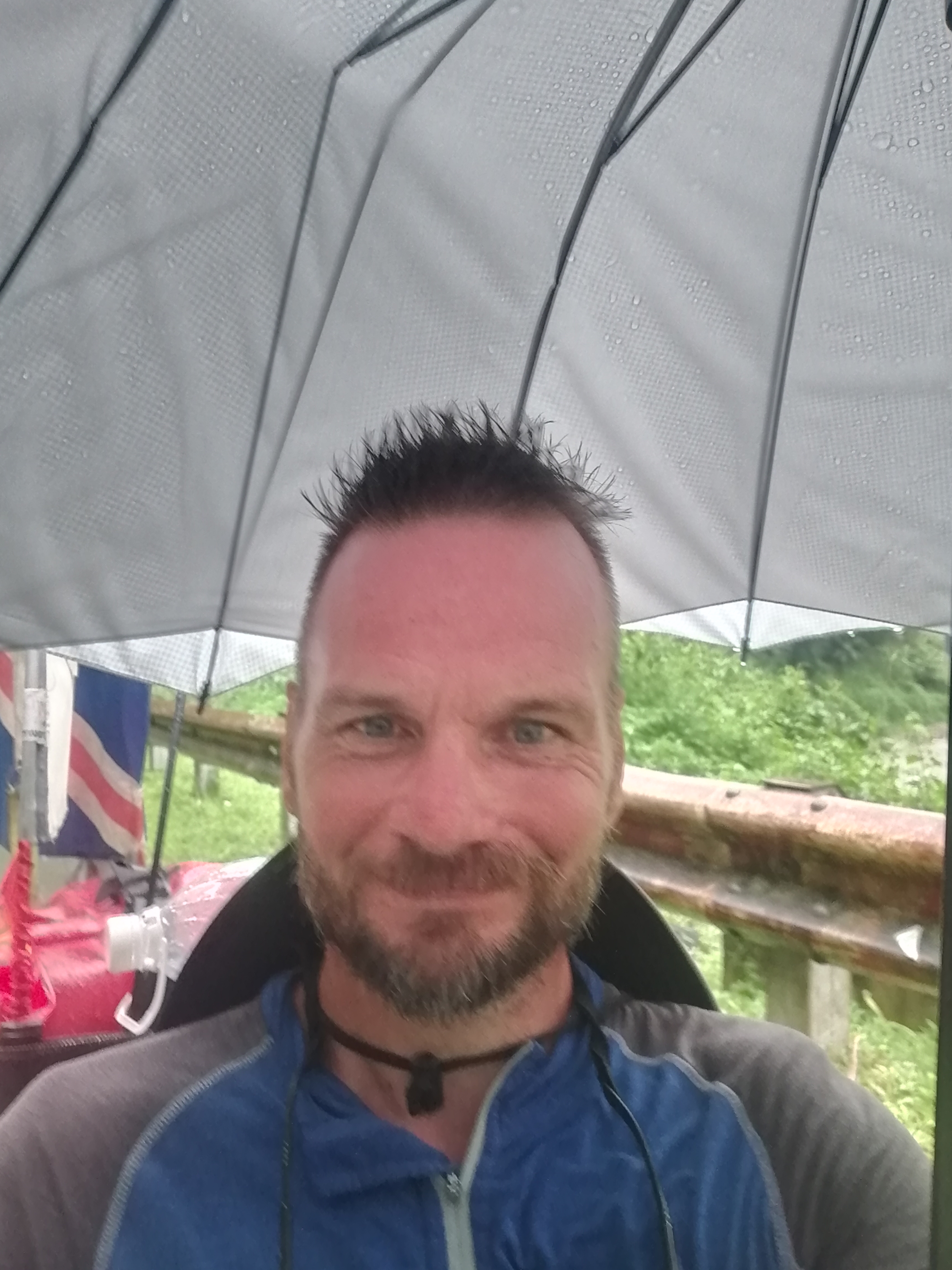 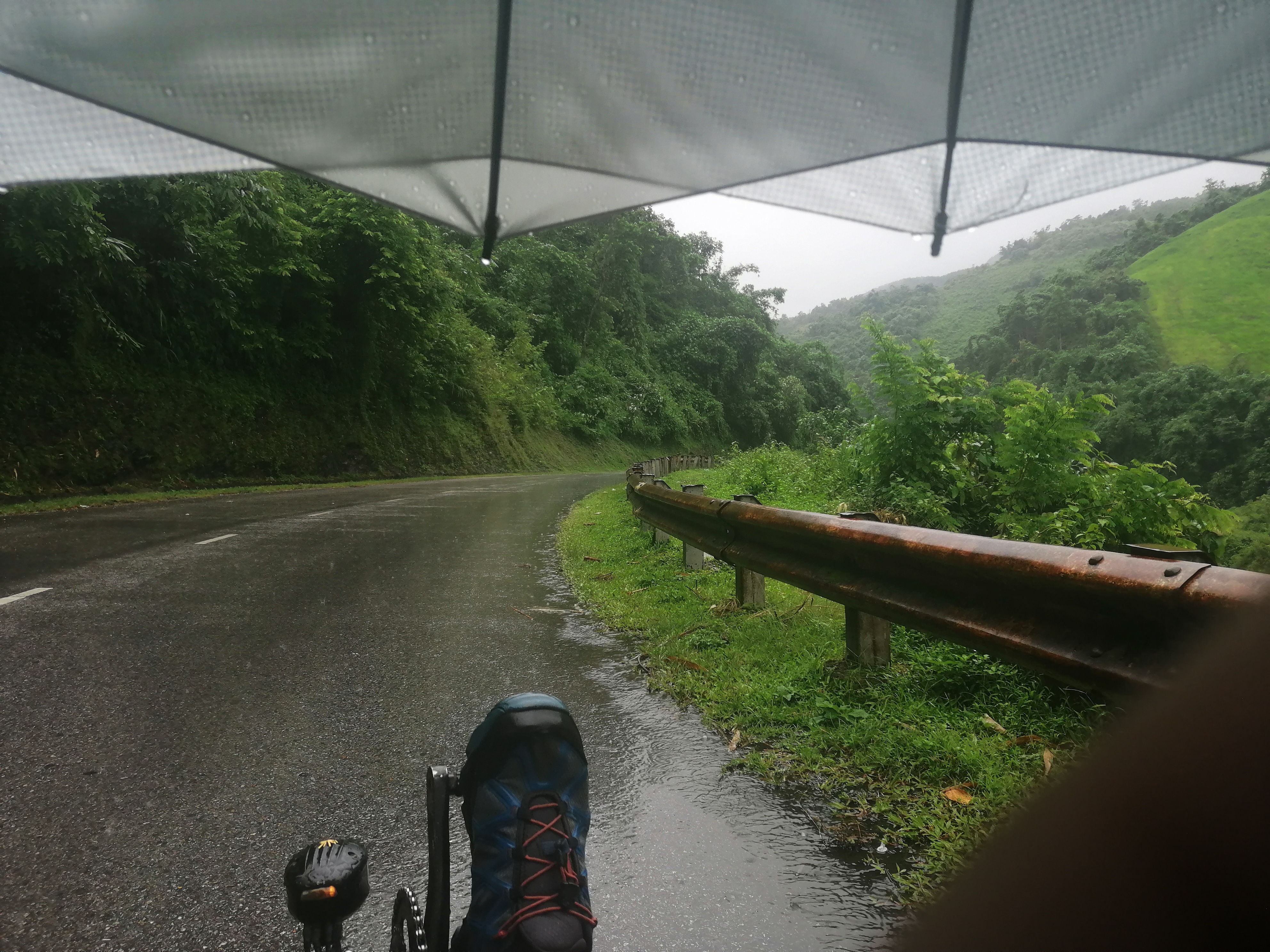 Ahh bugger, a slight accident! Coming out of Sapa the other day I was caught unawares by the sun, and didn’t put my hat on. Slight sunburn to forehead has now turned into flaky peely forehead! Pass the non existent moisturiser please!

Apart from that and a couple of small hills today I’m soon coasting down a rice laden valley into Dien Bien Phu. I’m feeling better today, but still a rest day is in order tomorrow.

Dien Bien Phu was the site of a major French defeat (1954) in the First Indochina War, and was of tremendous historical significance. The French defeat here led to their complete withdrawl from their colonies in Indochina, and the division of Vietnam into North and South. The battle of Dien Bien Phu is described by historians as: the first time that a non-European colonial independence movement had evolved through all the stages from guerrilla bands to a conventionally organized and equipped army able to defeat a modern Western occupier in pitched battle. As such, it had a massive effect on world politics, inspiring other independance movements and spuring a period of decolonization, particularly in French ruled Africa (where many of the troops who fought for the French had been recruited from).

Nowadays, Dien Bien Phu is a relatively quiet town, with a population of approximately 100,000. It acts as a regional hub for the province’s trade and transportation.

There’re plenty of guest houses and although I pick the cheapest it’s a lovely new place with comfy bed, good WiFi and only a 5 minute walk into town. There’s a bustling market area and also an abundance of small restaurants and street food stalls that sell something known as cơm bình dân. In Vietnamese the term literally translates to “commoner’s rice.”

It’s the Vietnamese version of economy rice in Malaysia or khao rad gaeng in Thailand, often considered a workman’s meal, including a plate piled with rice, served with your choice of a variety of dishes, all prepared and waiting to be ordered buffet style. So long as I don’t point at the chicken feet or pig knuckles I normally get a pleasant meal. Yesterday I had a large piece of roasted pork that was then thinly sliced and had the crackling on still, oh god it was heaven! 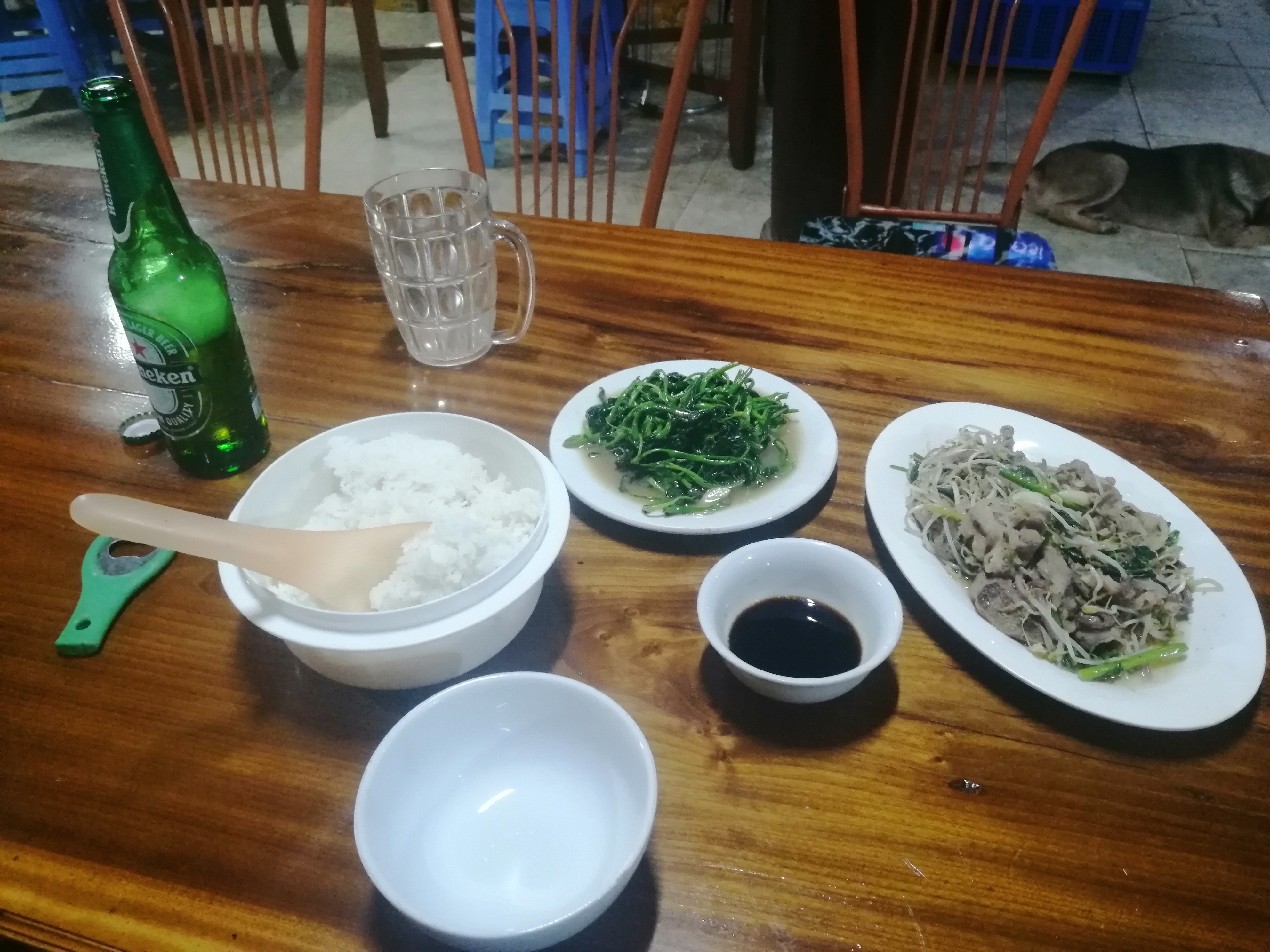 This is my last full day in Vietnam. Tomorrow I’ve got a 39km ride to the border with Laos and that will be Vietnam done! I spend time finishing off this blog and also finally publish my Hanoi blog, long overdue. A little sightseeing (involving 359 steps up a hill!) and that’s my excitement over for the day. 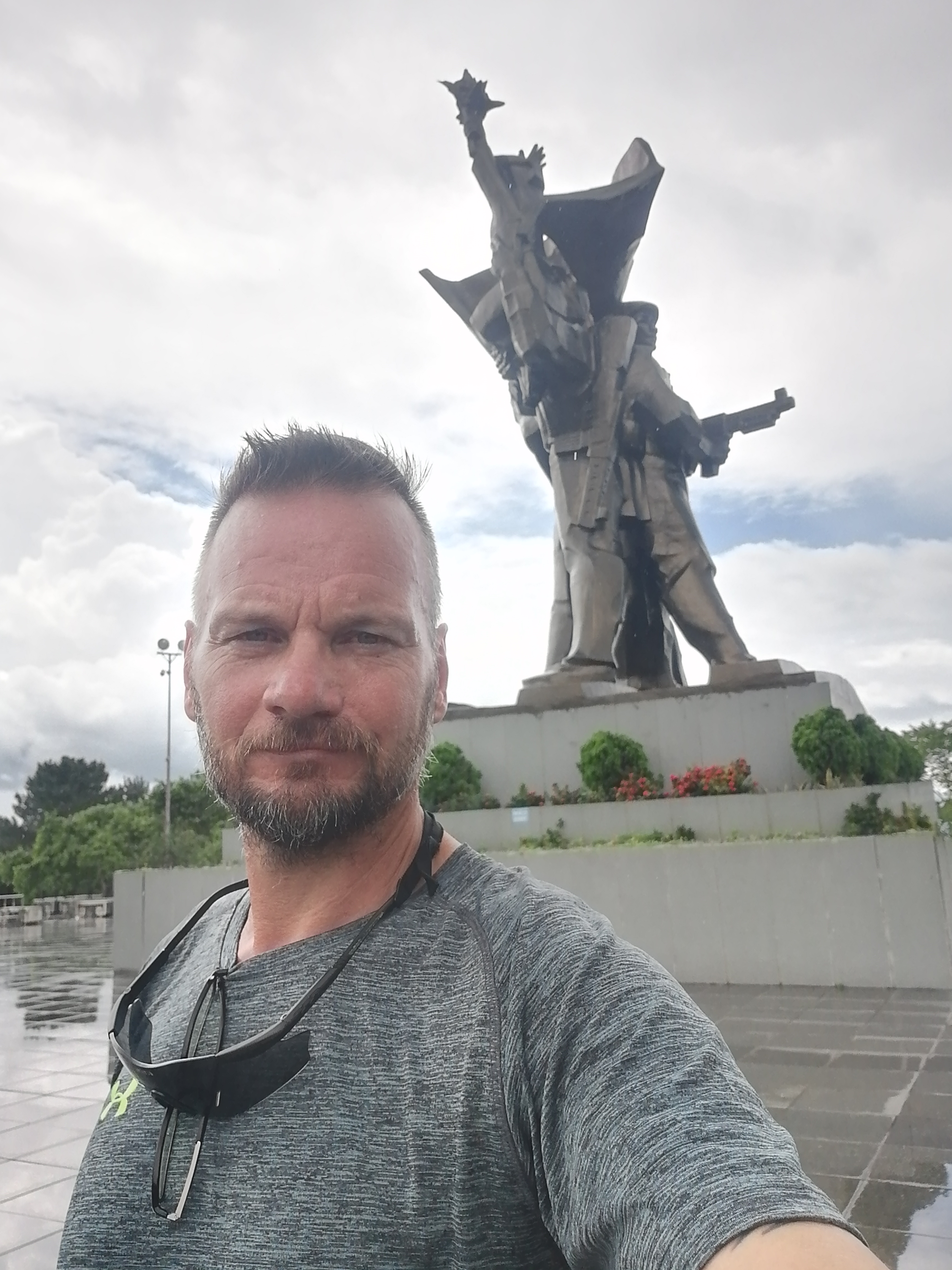 I have one more hill to climb out of Vietnam, 750m in 19 km to get to the border post, the gradient at least 3 times is 22%, but it won’t matter he says confidently now!

Time for some reflection. I know that you know by now how much I’ve loved Vietnam. I’ve said it before how kind and happy everyone is, the amazing beauty and diversity of this country. It really has been a thrill. I can safely say it sits joint top as my favourite country so far. I’m going to miss you Vietnam, your coffee, food, people, kindness, beauty… I could go on, but I’ll stop, you’ve got the message.

A special thanks to Nick and Ha, you have been amazing and I know I am always welcome. I know I’ll be back one day.

This site uses Akismet to reduce spam. Learn how your comment data is processed.